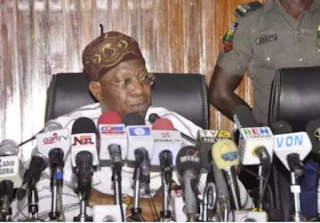 By MINISTER of Information and Culture, Alhaji Lai Mohammed, on Tuesday, said the Federal Government is unable to implement the capital votes of the 2017 budget because of lack of funds.
The declaration by Mohammed was coming some 24 hours after the Minister of Finance, Mrs Kemi Adeosun, told foreign visitors that the Federal Government would soon release N750 billion to fund capital projects in the 2017 budget.
Speaking during the 2018 budget defence session, at the Senate, on Tuesday, Mohammed said “it is not that government is deliberately withholding releases to fund the 2017 budget or starving us. It is because we do not have enough money to do that.

“When budgets are made, they are made based on certain assumptions and if you are not able to get enough to meet your assumptions, there will be poor release.
“At least, there is an improvement in different sectors like the Nigeria Customs Service, while the price of crude oil is getting better. There is also more peace in the Niger Delta. So we can produce more,” he said.
According to him, once the visa regime was liberalised, tourists would be encouraged to visit African countries.
The minister said there was an improvement in visa regime in the country, adding that the current “visa on arrival programme” recently introduced by the Federal Government was working well.
“Anybody who has been observing what is happening in the creative industry, including culture, film industry, and fashion, will see that there is remarkable transformation and that is because the government has provided the enabling environment.
“The creative industry is on a tripod, the government, the private sector and the practitioners and what government has done is to give the support that the industry needs to grow.


“For instance, sometime this year, the Federal Government included the film industry in the list of industries that will enjoy pioneer status.
“What this means is that if you invest in this industry with a certain amount of money, you will be entitled to a tax holiday for three years at the initial stage and another two years.
“In addition, dividends from your businesses will be exempted from taxation. This is one of the incentives government has given,” he said.