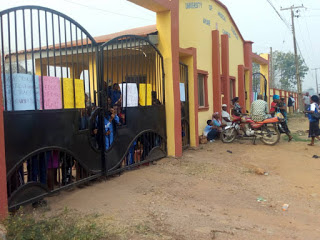 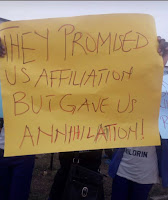 The protest which started at exactly 6:00AM at the Akure Campus, all gate leading to the school gates were locked up and all educational activities were distorted.
Some protesting students said we have been affiliated they say, but we have been scammed through it,
Upper directives and power stated that, the affiliation should involve us and that qualifies us to graduate with our BnSc.


Suddenly not knowing to us, we were given an hidden name and we are called IPNME (Institute of Professional Nursing And Midwifery Education) which we confirmed later that is not in anyway registered and neither does Nursing and Midwifery Council of Nigeria (NMCN) knows about it.

In the just concluded NUNSA (Nigeria University Nursing Students Association) conference, our delegates made confirmation, and it has been confirmed from the mouth of the NANNM Secretary general that there is nothing like IPNME. And we should be awarded BnSc. in as much we have been absorbed.


And our school fees has been bumped up to be much more than what we are suppose to pay under the saying of this affiliation that we ain't benefiting from.

So the agitations are,
1. We want BnSc.

3.We say no to hike in our school fees.

We have alot of evidence to back ourselves up.

We have the nursing faculty diary in ondo state, in which school of nursing is not present in it and there is nothing like IPNME in the diary.

Also, we asked the Ondo State commissioner for health Dr. Wahab Adegbenro, the statement concerning our affiliation, stating that we will graduate with BnSc.

It was also reported that a letter have been submitted to National Association of Nigeria Nurses and Midwives national body at Abuja and also Ondo Chapter of the Association.

Smart360Media correspondent reported that some delegations were sent to Ondo City to have a brief meeting with the Vice Chancellor of University of Medical Sciences Ondo City, Ondo State.

Professor Friday Okonofua, the Vice Chancellor of UNIMED told the delegates that they should not have gotten to the point of protesting as it is not part of the code of conduct of Medical College and sciences. He also added that, the students should have called him to discuss with him about the issues rocking the school.
In response to what the VC said, the students told him that since he never show himself as the V. C of the school since assumption of office, he later apologized.

1. He promised an immediate reduction in the school fee.

2. He also promised that the name IPNME has been scrapped with immediate effect.

3. He promised he'll also make a visit to the school(Akure campus) in two weeks time, for other deliberation. 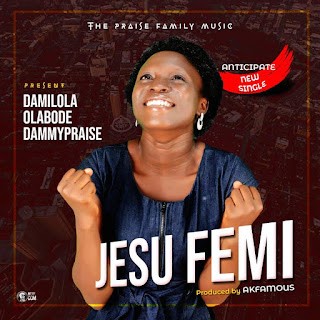